Minimum Wage and the Machines

Those who were excited about the minimum wage protests and subsequent hikes in many cities and states may fear what’s next – technology creeping into businesses as eventual replacements for humans.

As The New York Times recently reported, Panera Bread and Chili’s are the latest restaurants to start using computer tablets to assist in the usually human task of taking food orders and engaging customers. 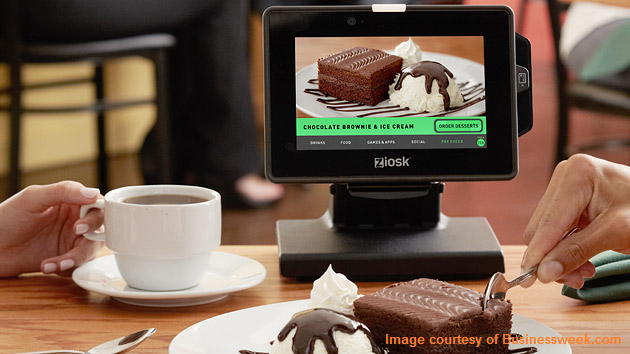 Arrival at the iPad staff party is a natural progression from online ordering and payment that have been used by many restaurants for some time now. And as history shows, when you have humans who spend money and humans who wish to earn a living, it is often non-human advances that upgrade the transaction.

Take self-serve gasoline. The first gas station to use self-serve pumps was in 1947, with girls on roller skates darting around to collect money and reset the pumps. It took decades to really catch on as many station owners did not believe people would want to pump their own gas, nor did they want to risk losing impulse purchases made inside the store. That’s why many reading this right now may remember when filling up the tank meant you stayed inside the car while a guy pumped your gasoline, cleaned your windshield and checked the oil. By 2011, thanks to technology, 90 percent of all gasoline sold in the United States is self-serve, right down to pay at the pump.

Which leads to the second example, ATMs -Automated Teller Machines. The first iterations of these money dispensing machines were seen in Europe in the late 1960s stemming from apprehensions over labor:

“In the case of the ATM, much of the initial impetus began with European bankers concerned about increasing unionization and rising labor costs. To economize, they solicited engineers to develop a solution for after-hours cash distribution.”

As with self-serve gas pumps, it took many years for ATMs to develop into what they are today, stand-alone machinized bank tellers that perform nearly 50 billion transactions per year, from deposits and withdrawals to bill payment and even buying gold.

Grocery store self-checkout machines are newer to the party and so far have experienced more lukewarm reception because the machines still cannot perform some human tasks like looking up product codes to identify produce.

Remember though, that the grocery store self-checkout technology is relatively new to the automated employee  world. As with self-serve gas pumps and the ATM, the technology will improve and expedite the shopping experience. Already in the works are more advanced “tunnel” machines to help alleviate shoplifting and produce identity crisis.

Also, grocers operate on about a one percent profit margin. Wal-Mart spends a stunning $12 million every second on cashiers’ wages at its American stores. With this math, it’s hard to argue against such  improvements for all grocers, from Walmart down to the corner supermarket.

Those who wring their hands over job displacement need not despair.

The self-serve option eliminated the need for gas station attendants at the pump, but it led straight to an explosion in convenience store sales because fewer people crowd the counter simply to buy gas. This means that rather than pumping gas, cleaning windshields and checking oil, gas station workers are instead swapping out fountain drink taps, dispensing lottery tickets and loading up hot-dog warmers.

ATMs allowed banks to hire fewer people to man customer windows, but more staff to help customers with more intricate and lucrative areas of finance like mortgages, lines of credit and wealth management.

A relentless push to increase the minimum wage will only increase the likelihood I Robot bumps people from jobs. But in the end, it often means a better, more efficient business model, superior service for consumers and capital to create more jobs in the new, high-tech workplace normal.