The “War on Poverty” Needs the Right Battles 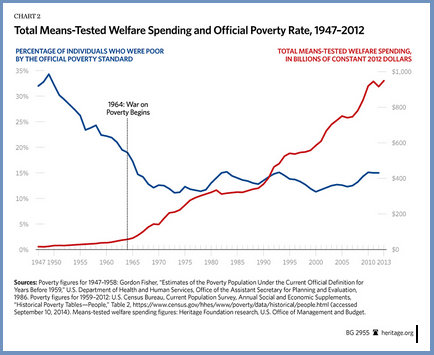 A war cannot be won unless there are smaller victories along the way. The “War on Poverty” is no exception. While noble in intent when first declared 50 years ago, the battles waged to help lift downtrodden Americans have been largely misguided, counterproductive and very expensive.

Robert Rector, Senior Fellow with the Heritage Foundation, has long researched poverty in the United States. He says the poverty rate has worsened since the “war’s” beginning despite more than $22 trillion in government welfare programs.

Part of this is math. The Census Bureau bases “poor” on a family’s income, but does not count most government assistance as “income.” If counted, more than 100 million Americans who received any government aid in 2013 would have an average income boost of $9,000 per person.

Part of this is semantics. As Rector points out:

“For most Americans, the word “poverty” means significant material deprivation, an inability to provide a family with adequate nutritious food, reasonable shelter and clothing. But only a small portion of the more than 40 million people labelled as poor by Census fit that description.”

Rector explains also that the standard of living is remarkably better for today’s poor. Fewer than two percent of  the Census Bureau’s poor are homeless, one in ten live in mobile homes and the typical residence is in good repair, uncrowded and larger than the average homes of non-poor in France, England or Germany. Government surveys also show the folks considered poor typically have air conditioning, cable or satellite TV and a computer. Most also own vehicles – sometimes more than one.

And part of this is that many well-intended government policies unfortunately harm job creation – the very vehicle that can actually lift Americans from a government label of “poor.”

We don’t like to see anyone living in poverty. And safety nets are important until they become unaffordable. Right now there are now more than 80 welfare programs that cost American taxpayers close to $1 trillion, not  including employer-employee contribution programs like Medicare or Social Security. The costs of these assistance programs have grown exponentially – 378 percent over the past 30 years for the ten most expensive programs alone.

With poverty rates unchanged in 50 years, it is clear that all of this government money has bought economic freedom for very few poor Americans.

Yet politicians and bureaucrats seem intent on removing what economic freedom we have left through even more government policies like minimum wage increases, health care “reform” and onerous industry-specific regulations.

The government’s own Congressional Budget Office says raising the minimum wage to $10.10 an hour would eventually leave as many as 500,000 people unemployed.

As for the impact of a minimum wage increase on individual economic freedom?

Take Seattle, home of the nation’s first government mandated $15 minimum wage. A University of Washington social work professor told NPR that a single mother of two small children who works at a fast food restaurant and receives public assistance would need “about $27 an hour or about $4,700 a month” to be free of government aid.

A study of Illinois’ food stamp program finds that killing jobs, rather than creating them, will only double down on the welfare problem – literally. The study found that in the post-recession years starting in 2010, food stamp enrollment outpaced job creation nearly two to one.

Business leaders also face uncertainty as the new federal health law slowly takes effect. The Affordable Care Act has already reduced the definition of full-time employment to 30 hours per week. And the employer mandate will force many business owners to either pay big to cover their employees or tweak their staff levels to avoid costly penalties.

Then there is an executive decision to chase down coal producers that could slash hundreds of thousands of jobs and prevent the creation of more than 200,000 others. And a recommendation to the National Labor Relations Board could jeopardize the entire franchise business model –  responsible for the creation of millions of jobs.

Good intentions do not always lead to good results. The battles to combat the “War on Poverty” should be waged against policies that impede economic freedom for both our entrepreneurs and business leaders as well as workforce. This will help the poor without hurting the workforce.